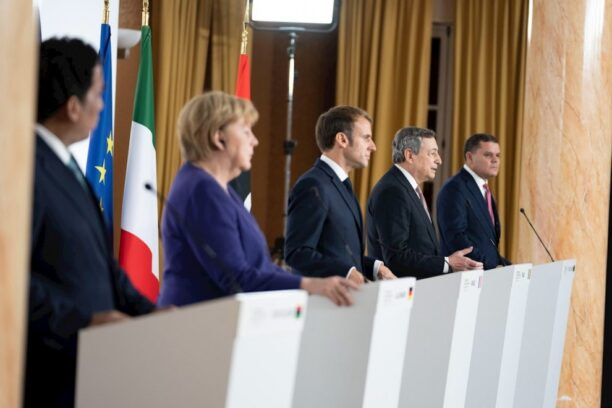 French President Emmanuel Macron has called for “free and transparent elections” to be ensured, as well as for Russia and Turkey to withdraw their soldiers.

The Libyan elections on December 24, on the air due to internal discrepancies, received support from the international community this Friday in Paris, where French President Emmanuel Macron asked Russia and Turkey to withdraw their mercenaries in the North African country.

The host of the Conference on Libya – the third since 2020 – brought together 13 heads of state or government, although neither those of Russia nor Turkey were represented at the ministerial level.

Both countries “must immediately withdraw their mercenaries and military forces, whose presence threatens the stability and security of the country and the entire region, ” said the French president at the end of that meeting co-chaired by German Chancellor Angela Merkel; the Italian Prime Minister, Mario Draghi; the UN and Libya itself.

Libya was represented by its two main figures: the leader of the Transitional Presidential Council, Mohamad al Menfi, and the Prime Minister of the Government of National Unity, Abdelhamid Dbeibah, who, however, have had disagreements in recent months.

“This conference has made it possible to manifest an international convergence in favor of Libya. We have an electoral framework and calendar . After decades of violence and instability, we must continue to mobilize to ensure free and transparent elections ,” Macron said.

Discrepancies on the electoral law

So far, multiple attempts to stabilize this country, rich in hydrocarbons and key in the route of irregular immigration to Europe, have been unsuccessful since the overthrow and assassination of its dictator Muammar al-Gaddafi in 2011.

At the Maison de la Chimie, the leaders who attended, including the President of the Spanish Government, Pedro Sánchez, agreed that the elections must go ahead, even though there is still no internal consensus to do so.

The main stumbling block resides in the requirements to appear in these legislative and presidential elections —the latter the first since the country’s independence in 1951—.

Libya’s Supreme Electoral Commission wants all eligible candidates to have left all their obligations three months before December 24.

This condition has opened the possibility that Marshal Jalifa Hafter, a strong man of the country who was not invited to this conference, enter the presidential race.

The president of the Supreme Council of State in Libya, a kind of Senate promoted by the UN in 2015 during its failed peace process, Khaled al Mishri , does not accept these requirements and has complained with the Security Council to denounce irregularities and violations. legal in the organization of the elections.

The conclusions of the meeting did not allude to these frictions but made it clear that they support the work of the Supreme Electoral Commission “on a technical level”, such as the registration of 2.8 Libyans on the electoral lists.

The participants agreed on the need to apply international sanctions if people or entities hinder the electoral process.

“We have no disagreements, legislative issues depend on Parliament (under the orbit of Hafter). There are laws that have been voted, there is no discrepancy on the date of December 24,” replied the leader of the Libyan transitional Presidential Council, Mohamad al Menfi.

The prime minister of the government of national unity, Abdelhamid Dbeibah, promised, for his part, “to accept the results” of December 24.

Draghi urged in his speech to make “an electoral law with the agreement of all”, in a matter of “days.” I Talia is one of the countries most affected by instability in Libya, its former colony.

From there, tens of thousands of immigrants have crossed to the transalpine coasts, a human drama that the Italian head of government mentioned. “You have to invest more in Libya, spend more money to create humane conditions for these immigrants.”

For her part, Merkel asked for an agreement “in advance” so that the results are accepted by everyone and recalled that “not everyone can win.”

Russia and Turkey in the crosshairs

In the document released at the end of the meeting, the attendees promised to promote “a synchronized, progressive and balanced implementation of the action plan” for the withdrawal of mercenaries and foreign fighters, who are linked to Russia and Turkey.

Macron advanced that the announcement this Thursday of the withdrawal of 300 is only a first step.

During the years in which Hafter extended his power to the rest of the country and raised an unsuccessful siege of the capital, Tripoli, he recruited thousands of Sudanese, Chadian, Arab, European, Syrian, and Russian mercenaries, and in particular to his ranks. the Private Military Security Company (PSMC) Wagner Group.

This company, which is associated with the Kremlin, became famous and fearsome in the wars in Ukraine and Syria.

For its part, the Government of National Accord (GNA) supported by the UN in Tripoli defended itself with the help of the Turkish Army and with thousands of Syrian mercenaries recruited by Ankara from among the Salafist groups opposed to the dictatorship of Bashar al-Assad.